DotA v6.78c AI map has been released by Defense of the Ancients development team. The DotA AI map consists of computer controlled players called Bots. With the help of this map, you can play DotA offline without any need of working internet/network connection. DotA 6.78c AI v1.4e contains improved AI item builds, skills and optimizations. If you are a beginner and want to learn the basics of DotA or Dota 2, AI maps are perfect for this purpose. 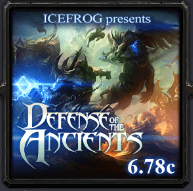 Download the map file with [.w3x] extensions. Open your Warcraft III Frozen Throne directory, go top maps folder and drop the map file there. Just make sure you have v1.24e or v1.26a patch installed before playing.

1. All of 6.78c content has been ported.
2. All AI heroes have their skills updated, they should work properly (more or less).
3. Some tweaks to item builds, including item builds for Oracle and Kaolin. More changes were intended but sadly were put down due to lack of time.
4. Name roster for -cn mode has been updated. Now it contains the names of TI3 contestants, instead of TI2.
5. Numerous behavior and logic changes, including a fix to old and annoying stuck bug that forced all AI heroes group in one point ( now they should get unstucked after 10 seconds or so ).
6. AI now uses 2 couriers instead of 1. Originally number was intended to be 3, but it was decided to use 2 since 3 would be, a little unfair.
7. Additional small tweaks like price checks and mana checks for AI have been applied. These should help AI manage their gold and mana slightly efficiently.
8. Now when AI is lvl25 and XP/Gold bonus mode is active, it will get extra boost to gold ( since bonus xp for lvl25 hero won’t matter anymore ).
9. Fixed some minor bugs that were reported. Most of them shouldn’t happen anymore.
10. Some code optimizations were applied. This should make map slightly faster/stable.